I have finished page 152 of my web comic Zheph Skyre. I do not know what it is about these past few pages, but I have gotten them done in time without a problem. Perhaps it is the fact that these pages have less details in them than other pages. I just hope I can keep this pace until I come to pages with much more details. By then I should have a computer tablet, and then perhaps the pages will come out sooner. 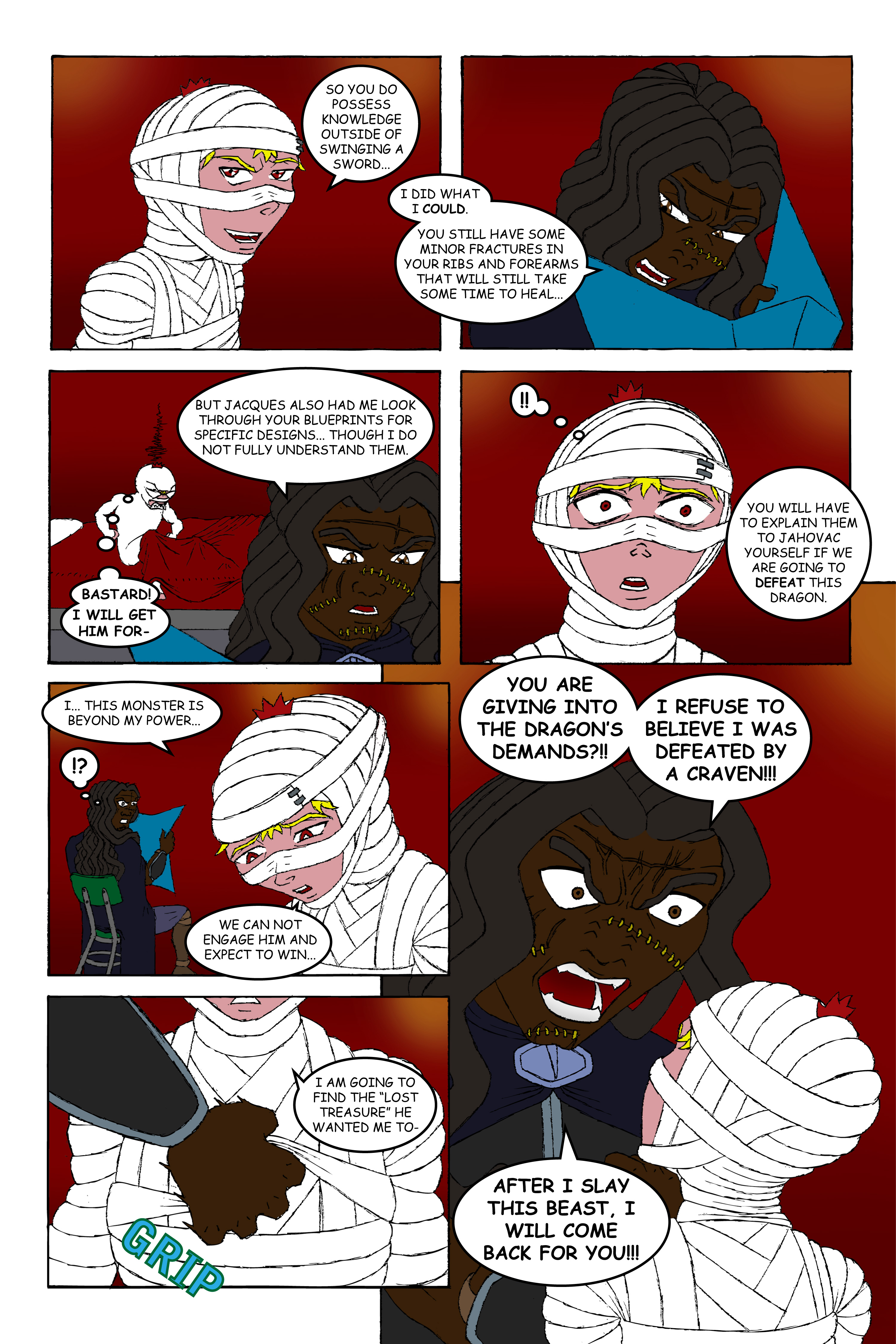 Zheph seems to be warming up to Jahovac, but it does not appear to be going the other way around. Zheph realizes Jacques is using Jahovac to get through to Zheph, specifically his blue prints. What sort of blue prints? We shall find out. Jacques and Jahovac seem to expect Zheph to help them with killing the dragon, but after the ordeal Zheph has gone through, I doubt anyone would want to face such a creature. Zheph is focused on getting the dragon the treasure. Jahovac is angered by that. Will Jahovac convince Zheph to help fight the dragon, or will Zheph fulfill the dragon's demands? 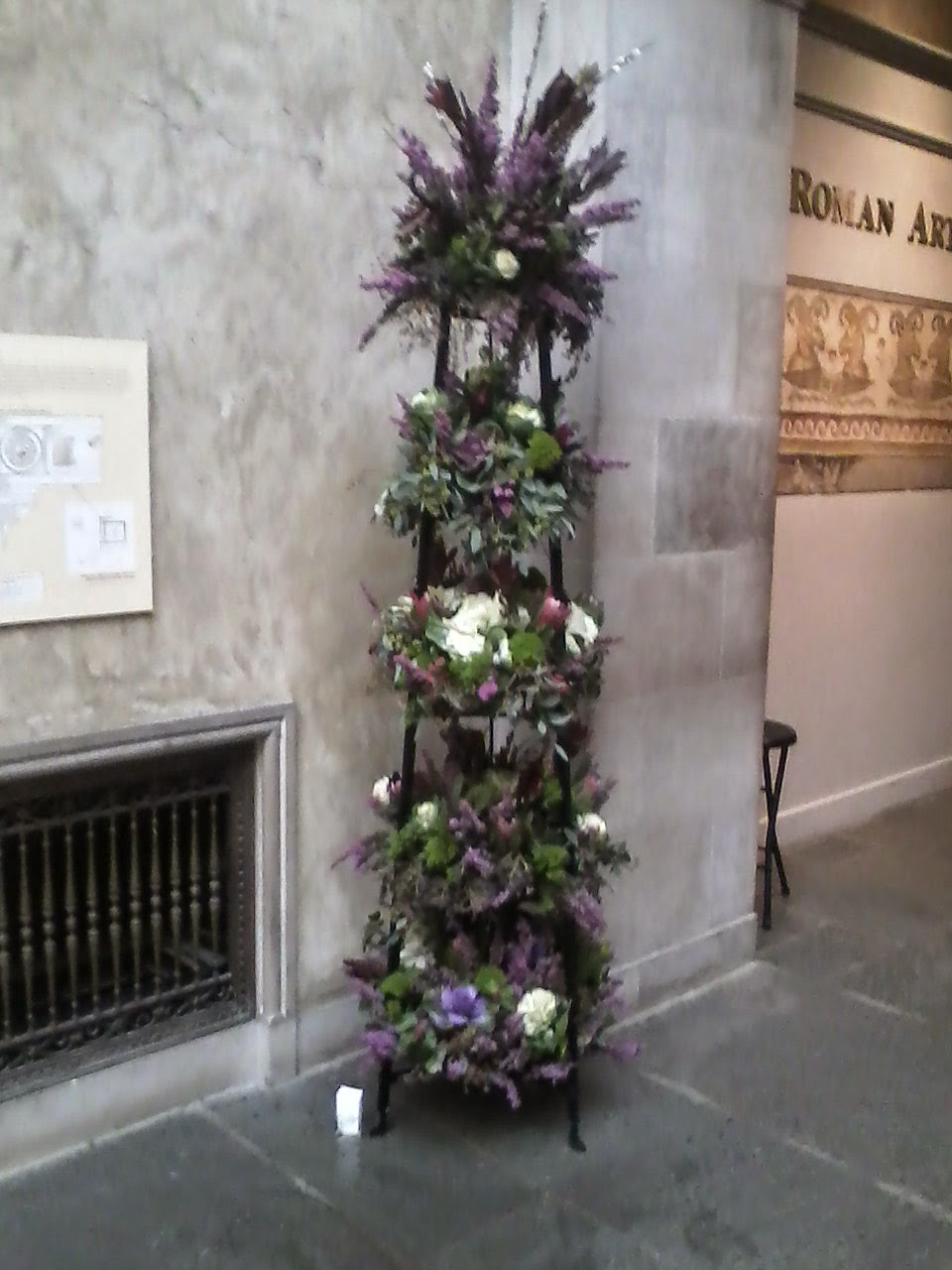 Flora is about to start at the Worcester Art Museum. Professional florists have already begun to bring in flowers and arrange them in very interesting ways. As usual, tomorrow the museum will be open until 8:00, but there will be a very expensive party beginning at 5:30. On Friday and Saturday the museum will be open until 8:00 as well, but on Sunday Flora will end at 5:00. 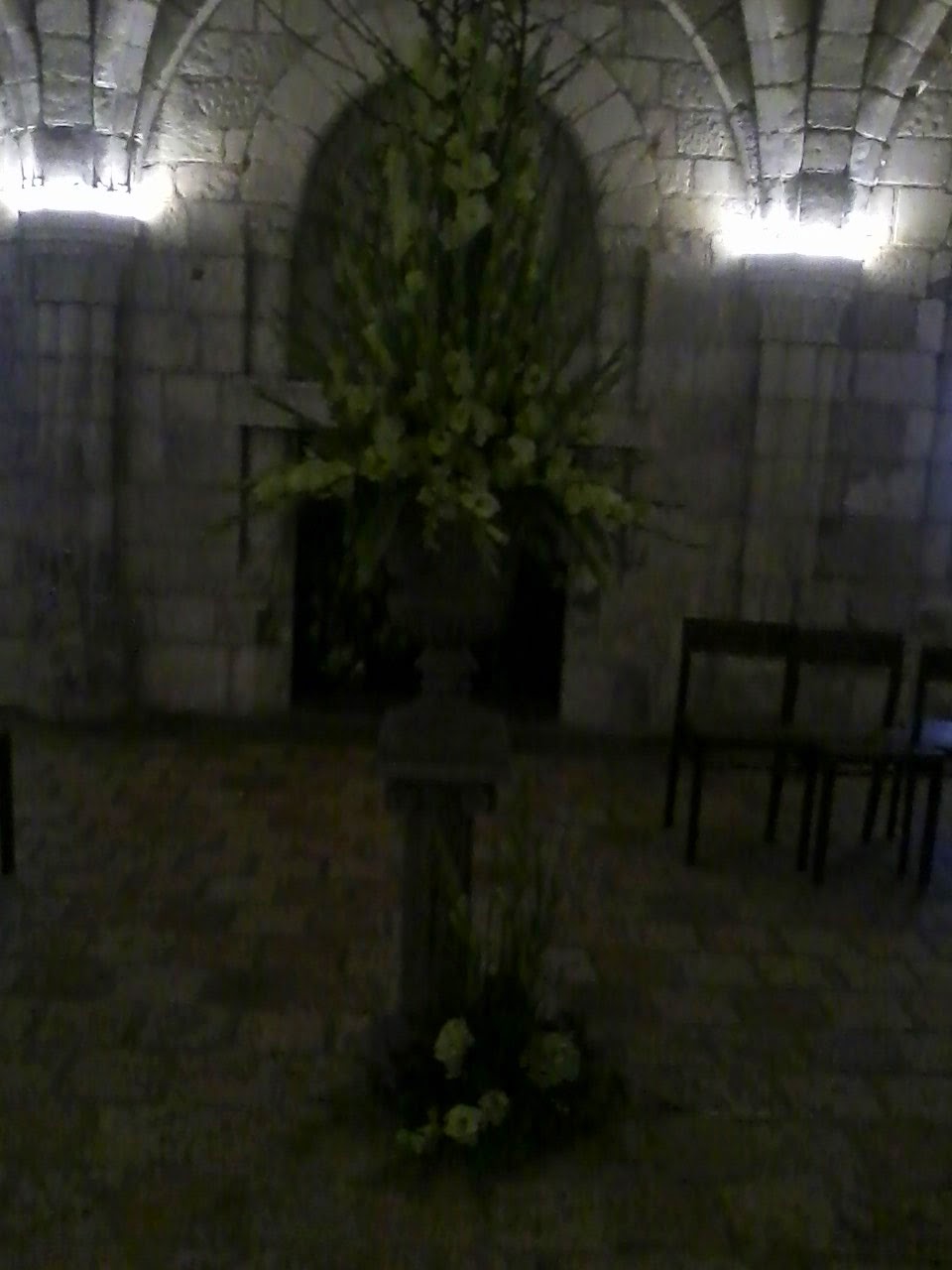 Posted by jdadragon at 9:11 PM No comments:

I have uploaded page 151 of Zheph Skyre. It might have been a few minutes late the other night, but please excuse my tardiness. My mother's cousin, Wayne Brink, passed away last Friday January 16th, and I had attended his wake on Wednesday the 21st. Many friends and family had gone to Wayne's wake. He was a very active hiker/explorer of nature, a photographer, a Vietnam veteran, a professor at Quinsigamond college, a loving husband, an interesting father, and an eccentric friend. He lost his battle against multiple forms of cancer. My earliest memory of him was when he invited my family and I to his summer barbecue. He did not serve regular hamburgers, but served buffalo burgers. I ate a chewy, white meat from a shish kabob and was told afterwards that it was alligator meat. After that, my family was invited to his Swedish, Christmas Eve Parties he held at his house every year which had various, interesting Swedish dishes and ended with drinking glogg. I was a little skeptical of these things at first, but along with Wayne's friendly personality, it was always an awesome time. Christmas Eve will never be the same without him now. Here's to you Wayne, there are many people who love you and hope you are at peace now. 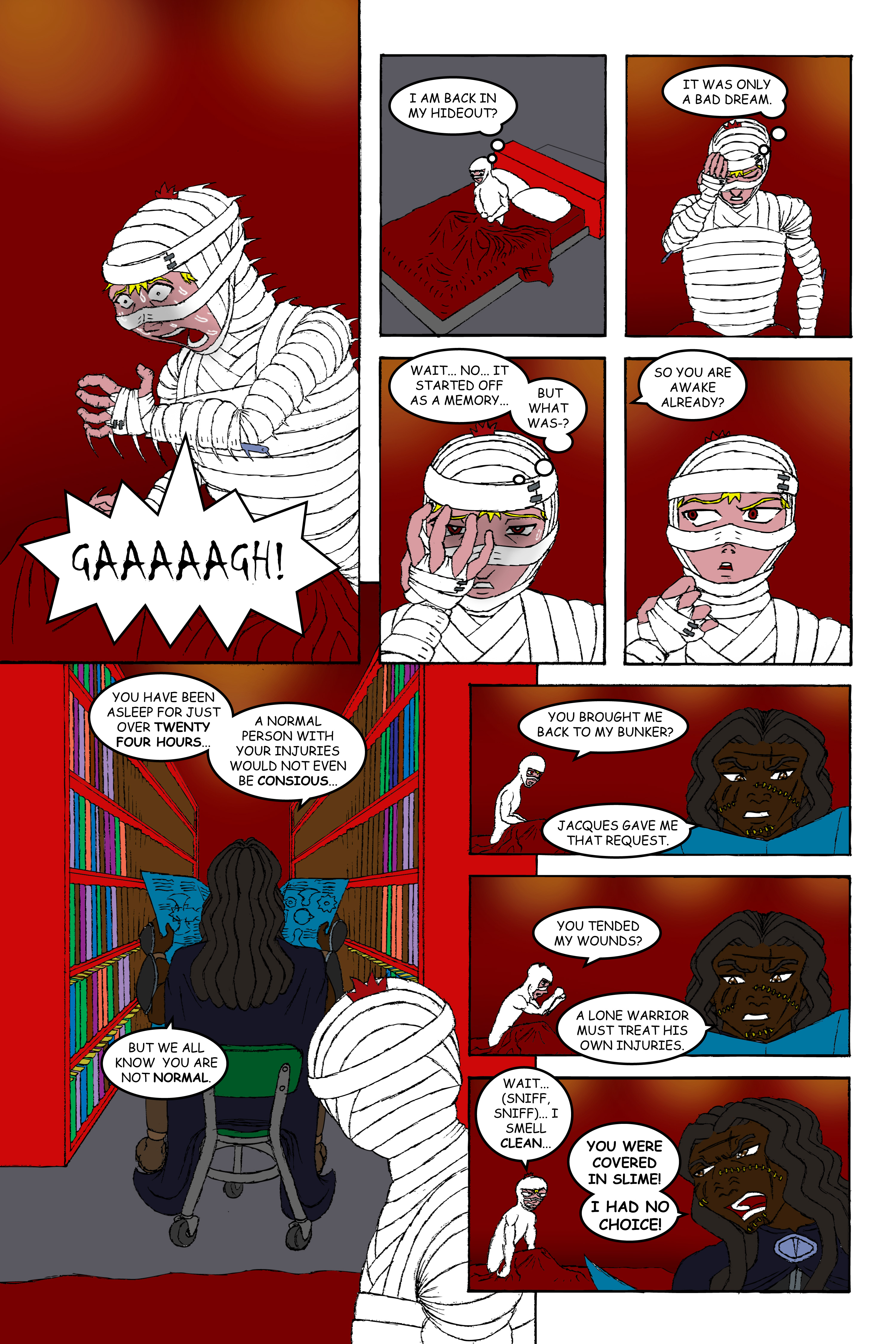 Here we see Zheph wake up from a deep sleep and recollection of years past, or at least up until a certain part... He awakens to find himself wrapped in bandages and taken care of by Jahovac. It is is a little  unexpected, but it makes sense in the end because Jacques hired Jahovac to capture Zheph to use him for his knowledge. Zheph is useless to Jacques dead. Jahovac doesn't seem to be too comfortable with this arrangement though.

Arisia 2015 was enjoyable. I did not sell nearly as much as I did previous years, but I got to eat a lot of free food and I went to my sister's condo, my friend's apartment, & the MFA while I was in the area. 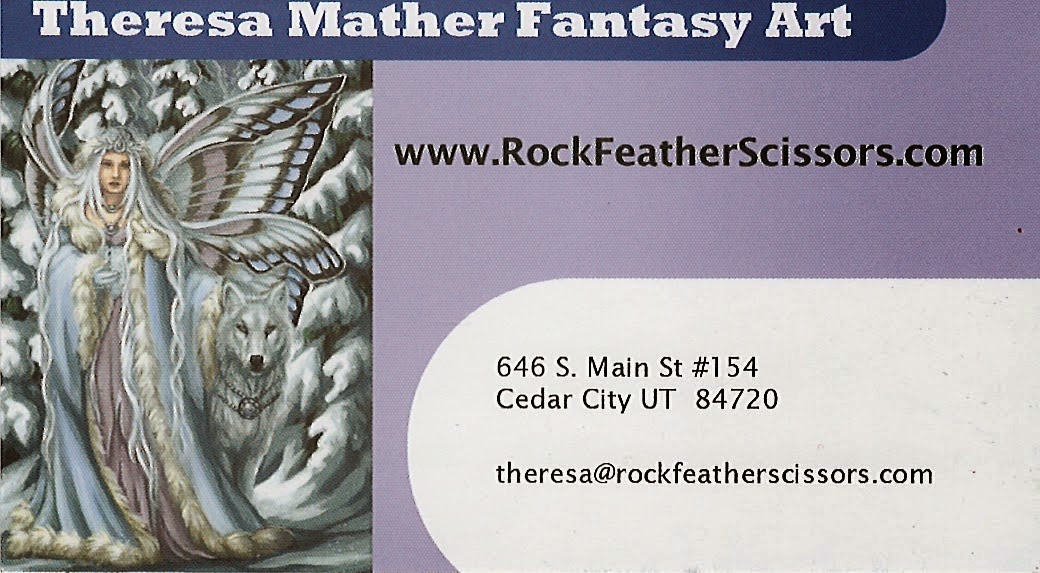 Here's the business card of Theresa Mather. If you like fantasy art, you'll like hers. She does a lot of dragons, cats with wings, and other mystical creatures.

Another flyer for Nauticon 2015. I have signed up for the Artists' Colony at this convention, but I have no idea if I will get it or not. If I do, I will be sharing the space with Frankie Stevens, author of the book "Polarity Breach: The Divine Spark." 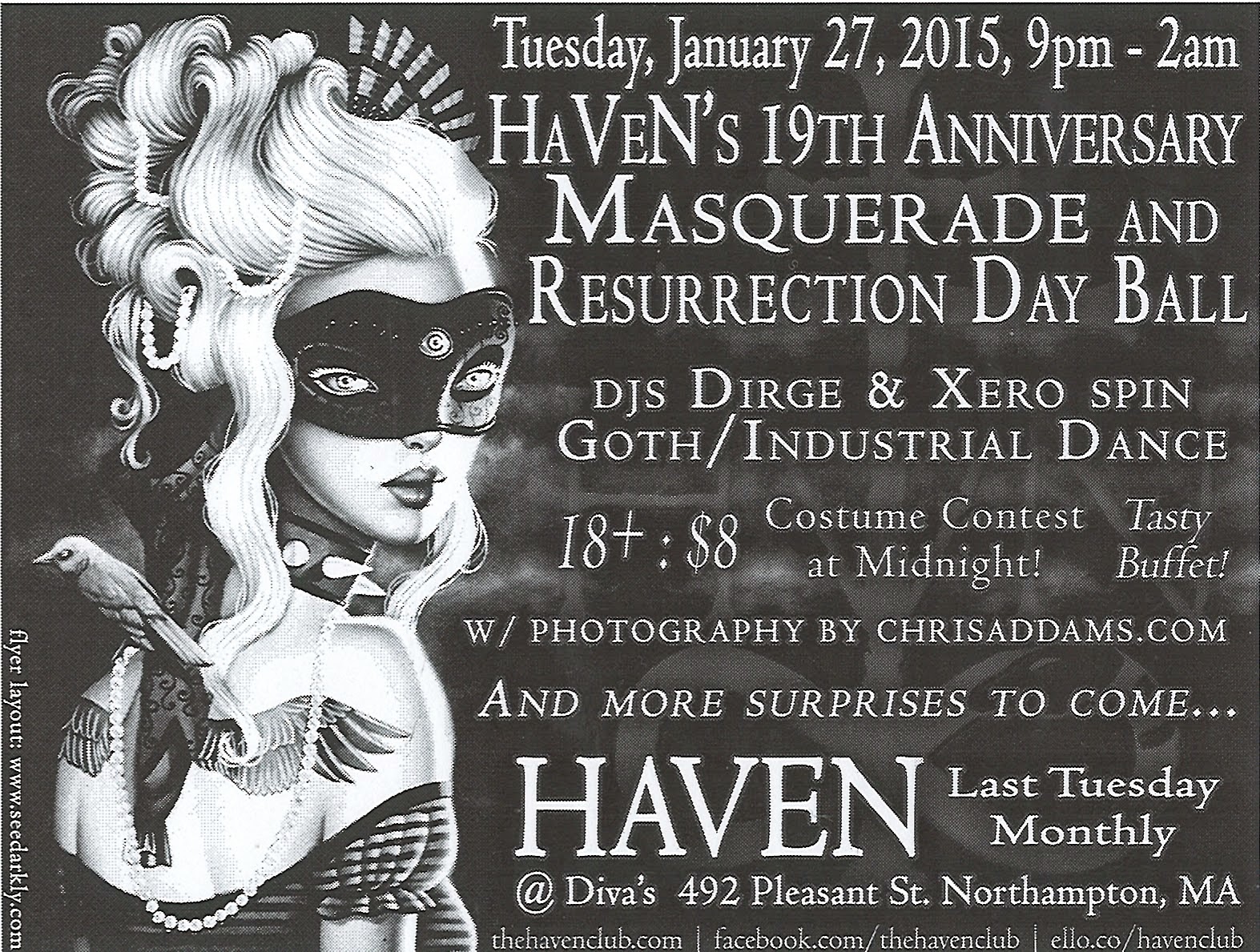 Here is a flyer for a Masquerade at the goth club, Haven, tomorrow night. It sounds interesting, but due to the incoming snow storm, it might be postponed. I do not believe I have a good enough costume for this nor much money to spend. 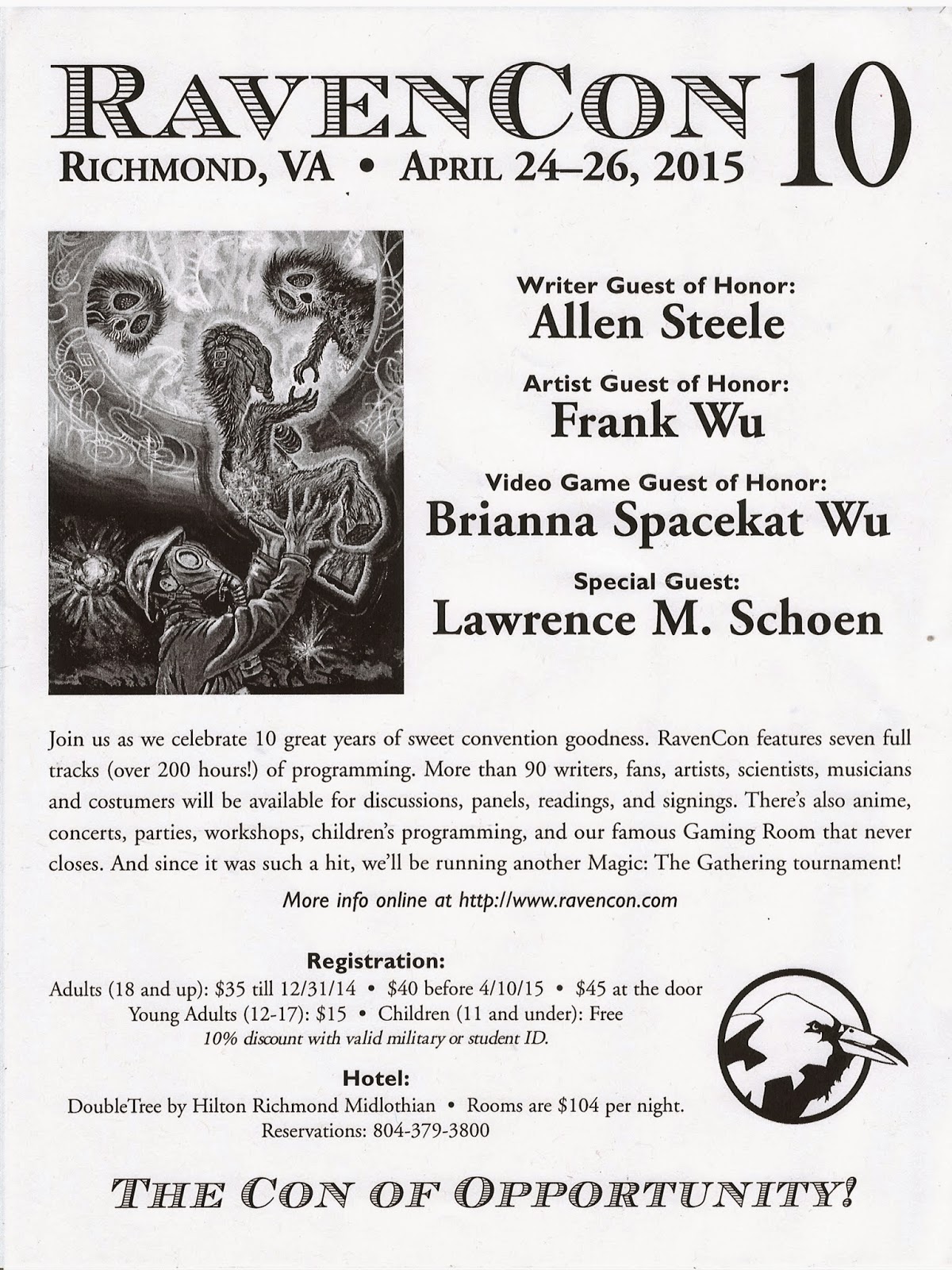 Another flyer for RavenCon, a sci-fi/fantasy convention in Richmond, Virginia. They are celebrating their 10th year! 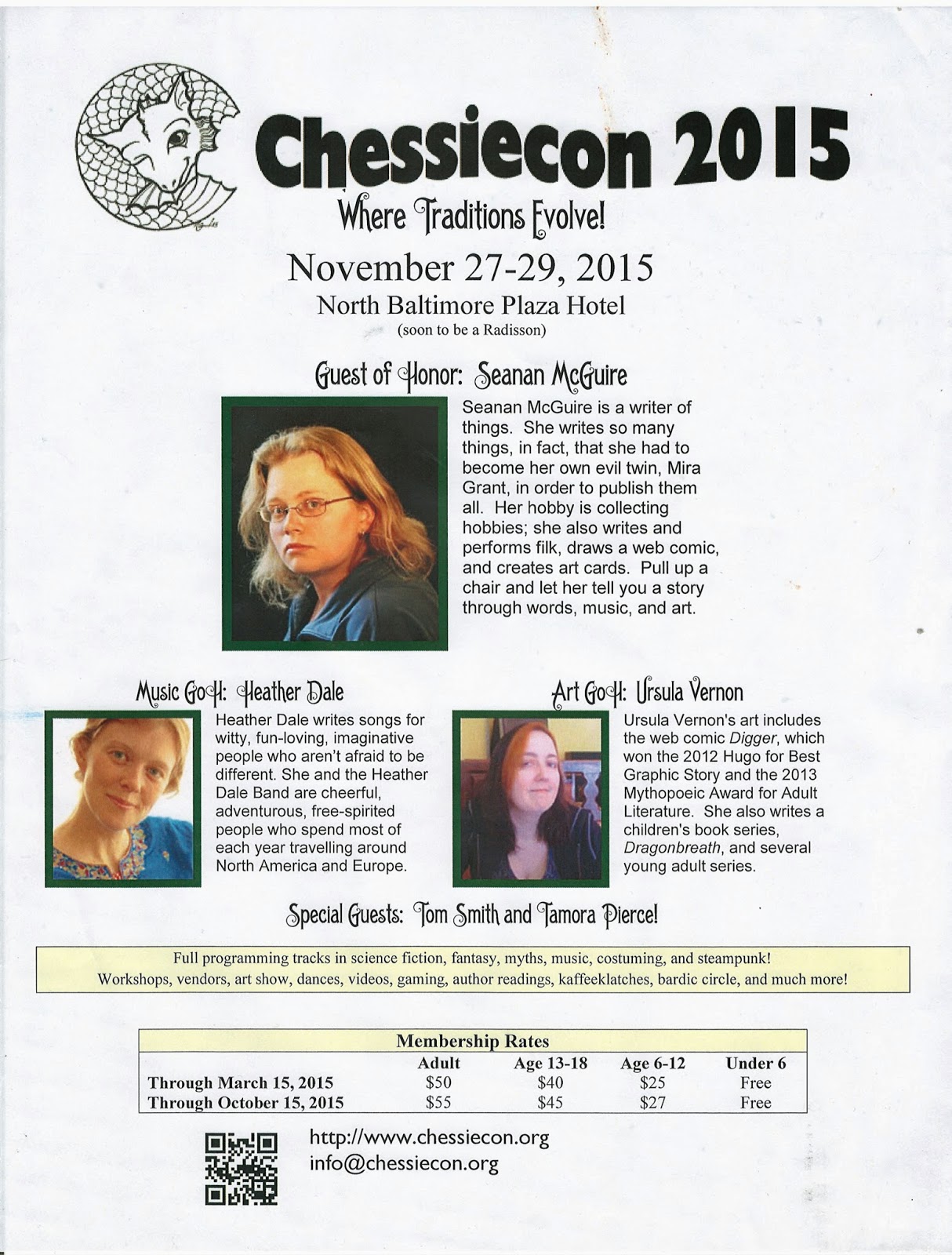 Here's a flyer for Chessicon, a sci-fi/fantasy convention in Maryland. They did accept my artwork for this convention and I mailed it to them. I could not attend myself because it is a far drive for me, it was right after Thanksgiving, and I do not have much money to spend on a hotel. 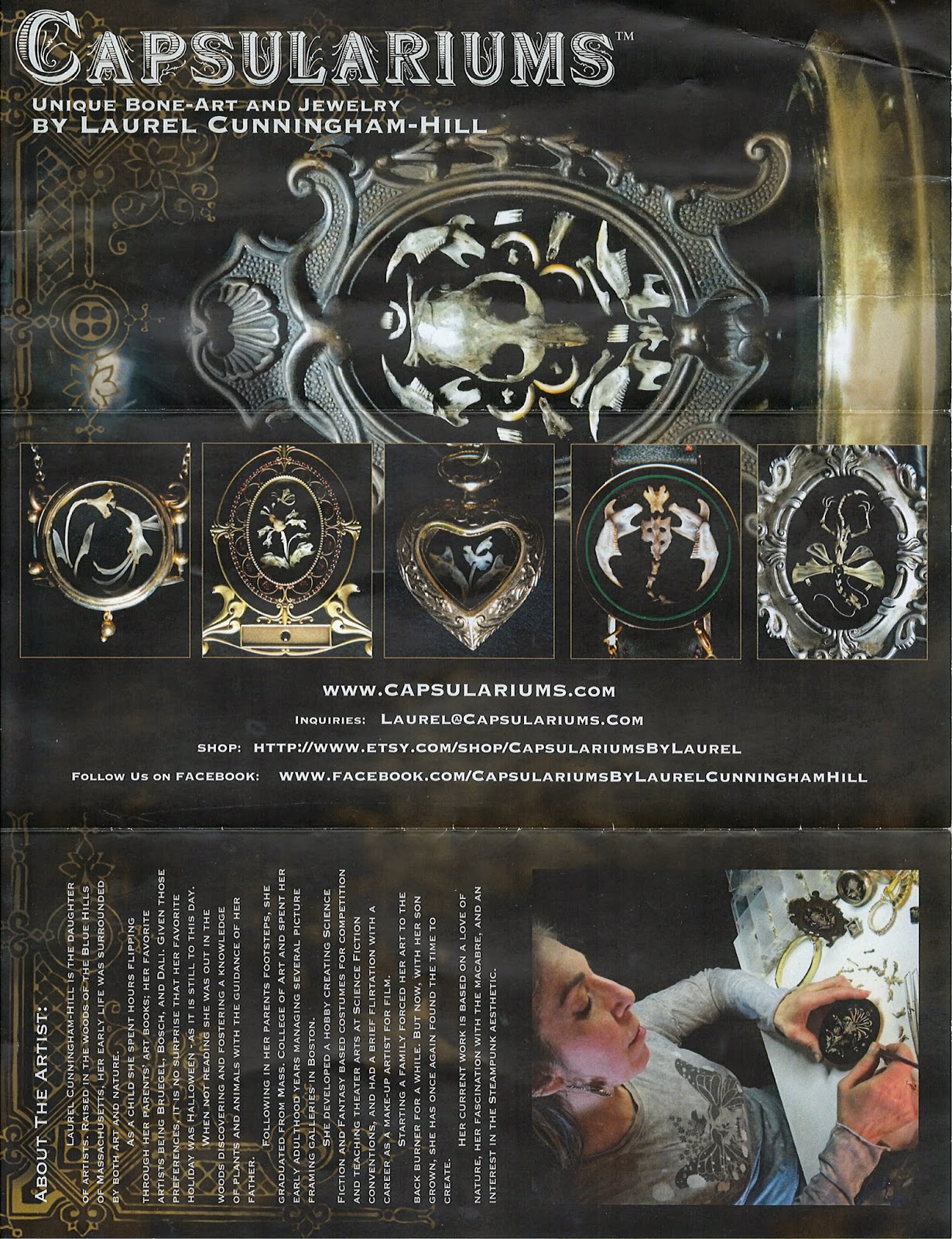 Here is a pamphlet for artwork by Laurel Cunningham-Hill titled Capsulariums. It is artwork using tiny bones of rodents and displaying them in tiny frames or hollowed out chain watches. She makes some very interesting stuff! Don't worry, these are bones left from owls and are sterilized beforehand. 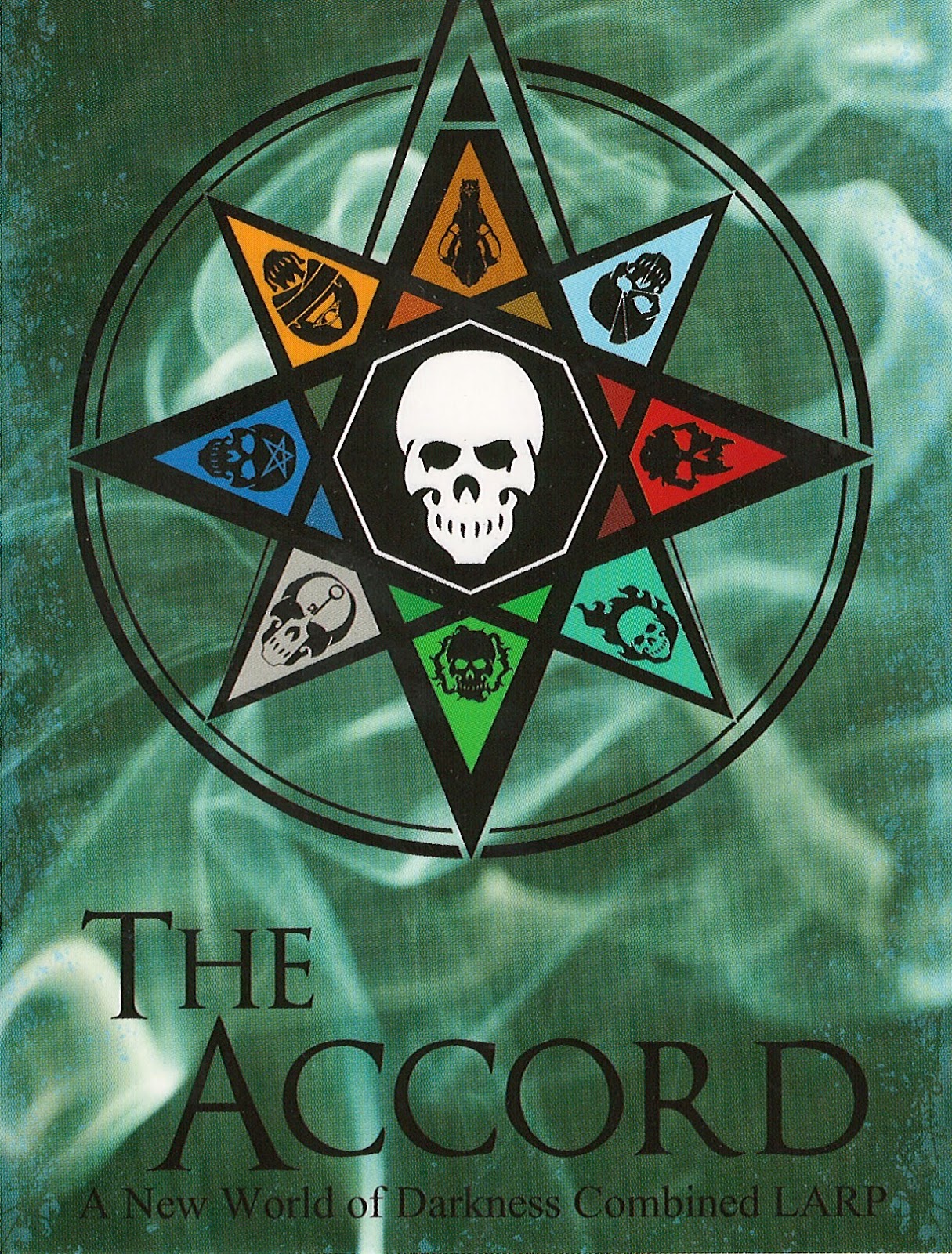 Here's a flyer for a new LARP called the Accord. It made me a little angry that their symbol looks way too much like the one I have on my portfolio site! I I'm trying not to let it get to me.
Posted by jdadragon at 4:59 PM No comments:

Sorry I have not been updating this blog as often as I used to, but I am hard at work on this web comic story, I have been working on getting everyone their rewards for the Kickstarter, and lately I have been getting ready for the Arisia Art Show of which I will be attending this Friday. 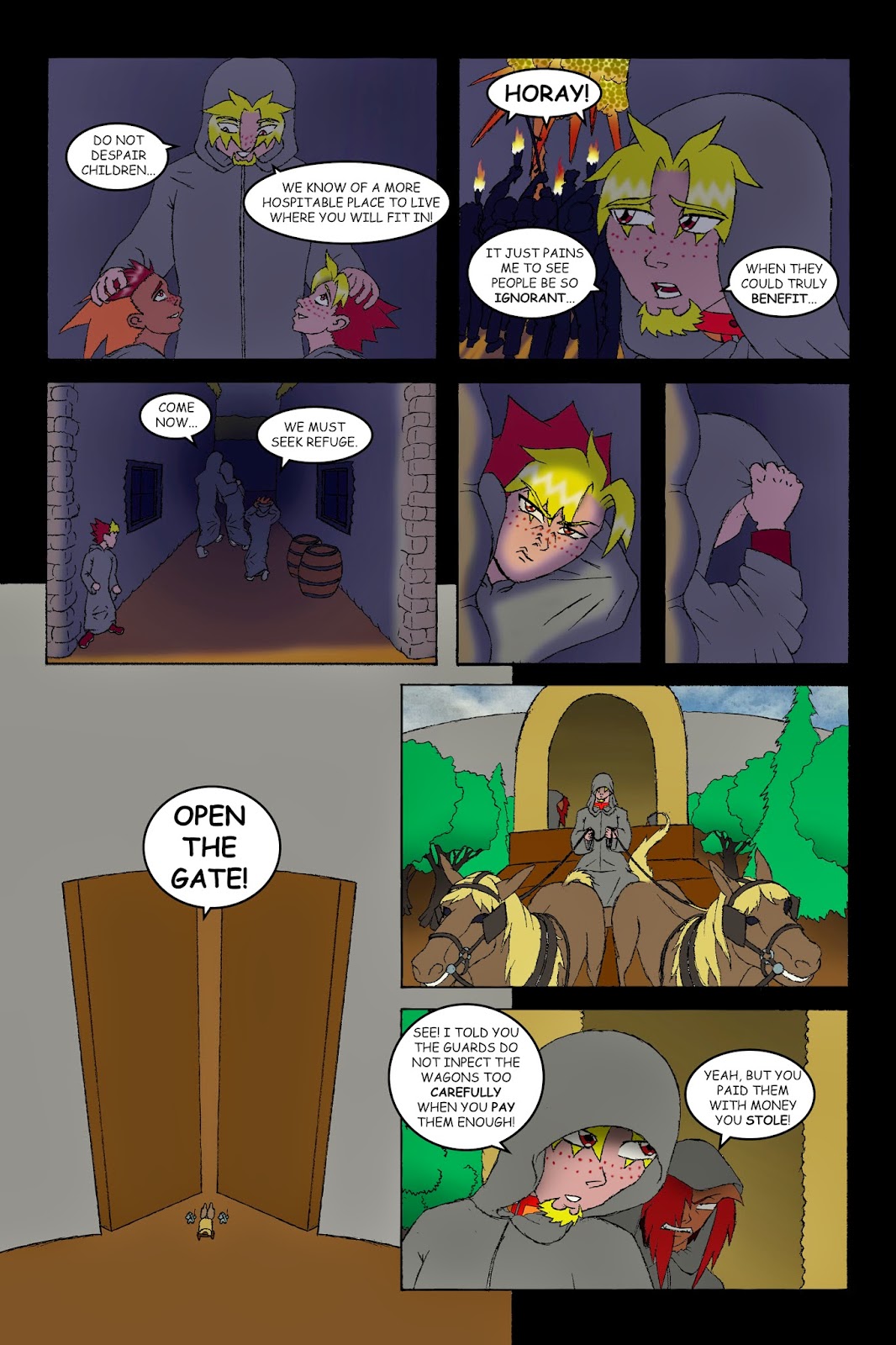 Here is page 148 of my web comic. Zheph and his family appear to be set on leaving in this flashback. They appear to go through certain lengths in order to do so... 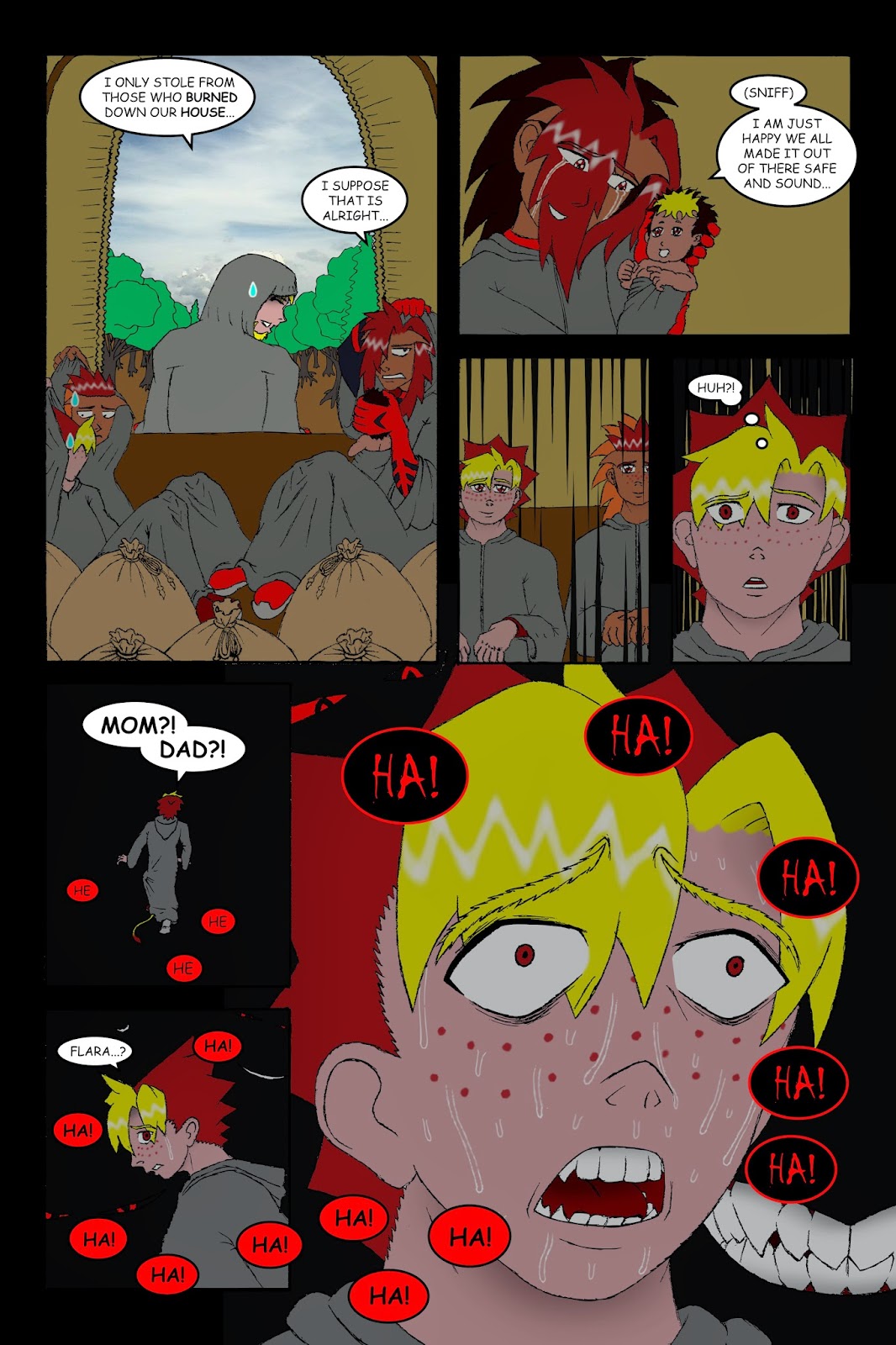 After such a terrible tragedy with their house being burnt down, the Skyre family appear to be optimistic as they leave Corthon behind, but Zheph appears to be having a hard time remembering what exactly happened after he left the city. He seems to be troubled with something.

I realized a while ago that the tear and sweat drops I had been portraying in my web comic have not been the best. I was simply trying to fill in the outline of the drops with a light, white fill. I knew that it made the water look milky, but I wasn't sure what to do instead. It wasn't until recently that I discovered a different method of portraying such water drops on people. I might go back into previous pages and make the same changes if I get the opportunity.

If you are wondering why the laughing speech bubbles are red and black, it is simply that the character or characters who are laughing are laughing maniacally and are not normal human beings. 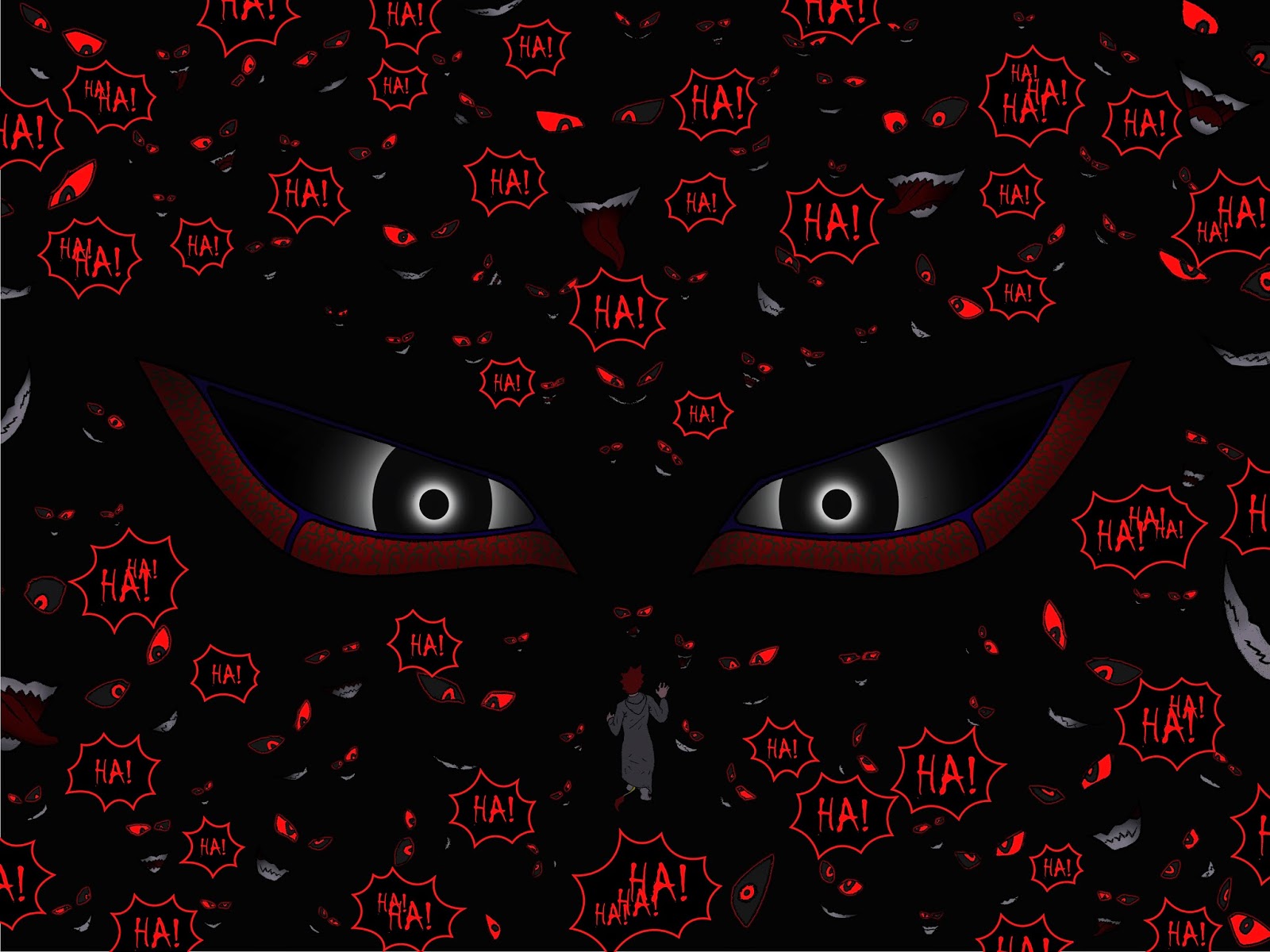 Here is page 150. Zheph stands among many creepy eyes and smiles, but the largest are terrifyingly soul piercing!

I love this page! I decided to have this page as a double page with a single image because I wanted to portray just how intimidating this unknown force is. This page took quite a bit of time to complete and more layers than I thought I was going to use. I'm going to show this page at Arisia this weekend.
Posted by jdadragon at 5:23 PM No comments:

jdadragon
Hello, my name is Joshua D. Altobelli. I am an illustrator, animator, and designer.

Other Artists I know